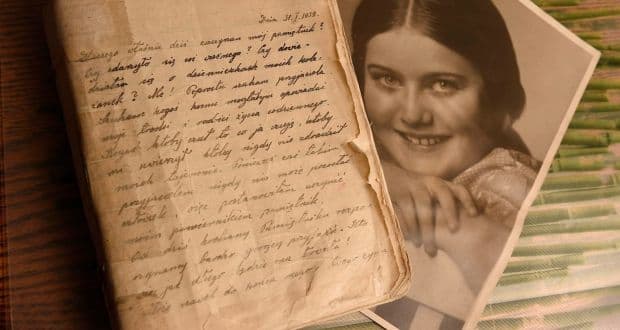 Renia Spiegel began writing her diary as a teenager in Poland on Jan. 31, 1939. By July 30, 1942, at only 2 months past her 18th birthday, like young diarist Anne Frank, she was murdered by the Nazis.

The diary was kept for years by Zygmunt Schwarzer, the boy Renia fell in love with. Zygmunt had tried desperately to save her and his parents, but in the end, could only watch helplessly as the Nazis found the attic in which they were hiding. He saw them dragged to the street and shot. “Three shots! Three lives lost!” he wrote in at the end of her diary. “Fate decided to take my dearest ones away from me. My life is over. All I can hear are shots, shots … shots.”

Mr. Schwarzer survived Auschwitz and emigrated to the U.S. where he became a doctor. At some point, he gave the journal to Renia’s younger sister, Elizabeth Bellak, now 88, who was living in New York. Unable to bear the pain of reading it, she has explained, she kept it in a safe deposit box for decades, until her own daughter helped bring it to light.

And now, after all these years, this journal was just released in English. Renia’s hopes, her thoughts, her poetry, will be read by millions. Her diary, being read so many years later, is moving on a personal level and will have impact on research as well.

Sometimes we ask ourselves what is the worth of writing the story of our own lives? To whom will it matter?

Perhaps we will never know the answer. But, maybe some unknown readers in year 2100, will pick up great, great grandpa’s book and find insight into his own life. Or another reader may discover something about life in 21st century America that will surprise her or give her a deeper understanding about our culture, our challenges and our responses to them.

We may never know how many people’s lives our story will touch in the future, but it is a journey well worth taking. In the meantime, I’m heading out to purchase Renia’s Diary today.